Qld Firearms Registry data to be hosted at Australia Post 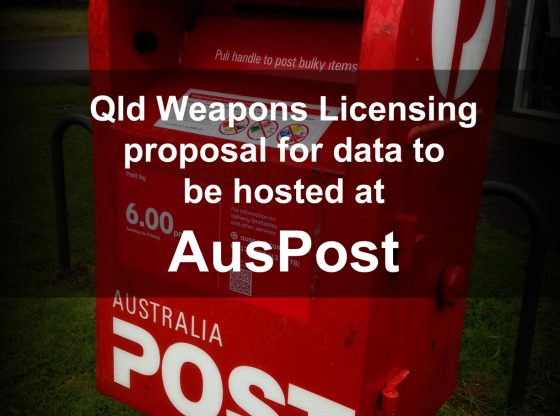 This article is Part 2 in our series on information exploitation.  You can read Part 1, about myHealthRecord here.  You should opt-out of myHealthRecord immediately.  Click here to find out why you should and how you can do that.

Part 2: Proposal for Qld firearms registry to be hosted at Australia Post

Just over a month ago, LAFO applied for access to all documents concerning the Qld Weapons Licensing proposal for their database of all firearms licensees and the firearms registry to be hosted (that is, stored) by Australia Post.  This proposal has massive ramifications.

In refusing access to 81 documents about the proposal, the QPS decision leaves no doubt the proposal is very real.  Refusing us access to the documents, a senior sergeant in the QPS RTI unit acknowledge there was good reason for public interest in this proposal:

I acknowledge that the information subject to this application would promote open discussion of public affairs, and that the Queensland Police Service is accountable to the community for its management decisions. […]

I acknowledge that the manner in which the QPS reaches management and strategy positions is a matter of serious public interest, and may contribute to positive and informed debate.

In factors prevailing against the release of information about the proposal, he wrote:

You are seeking documents concerning negotiations in regard to a significant change to the way that the Weapons Licensing Branch conducts its business. Despite the negotiations, there has been no final agreement, and this arrangement has not been made public. […]

Well, it certainly is public now!

Ultimately, QPS claim that any public knowledge of their proposal will disrupt their ability to choose a proposal they like.  They expressly say they don’t think the best choice for storing the firearms registry should be publicly debated:

Given the level of public interest in weapons licensing, it is reasonable to assume that release of this information would result in increased media activity and political debate. It is also reasonable to assume that some of this debate would be disruptive and a consequence of this debate would be to inhibit candour and frankness.  It would also require reallocation of resources to deal with the disruption caused by disruptive reactions (resources which would otherwise be involved in finalising the deliberative process). This would greatly interfere with the ability of the QPS to objectively consider its options and decide on courses of action.

This masks a greater truth: Weapons Licensing has been terrible for years

Queensland Weapons Licensing are costing this state well north of $20m/year on any conservative appraisal.

Their service is appalling: license renewals have been delayed for months and they have even stopped taking phone calls on Wednesdays (click here).

They recently decided to appeal against QCAT’s decision to let a farmer keep a pistol that he’s owned for 20 years.  (You can read coverage of that original victory by the farmer here.)

Australia Post has, through the Sylvania Waters Post Office, been indirectly involved in a massive criminal importation scheme (click here).  Between 140 and 220 Glock pistols were unlawfully imported from Austria.  People went to jail for this.

Yet, Queensland Weapons Licensing has decided to embark on a proposal to bring Australia Post into the pivotal role of storing and managing the data of the Queensland Firearms Registry.

Questions for the Police Minister

Qld Police say gel ball blasters are toys while NSW Police charge people
Confiscations and ammo limits? Personal data is the key to a more intrusive registry and more cost for you