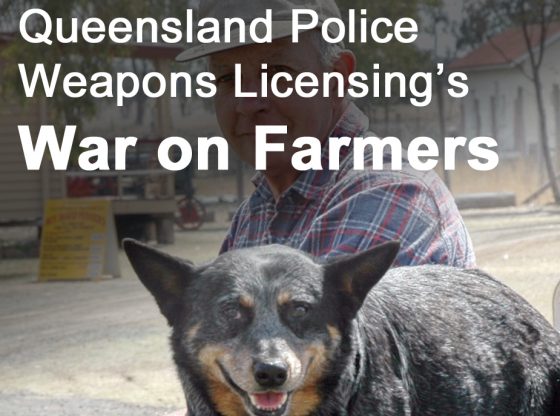 We’ve written a lot about about the war waged by Queensland Weapons Licensing Branch against farmers.  Many Queensland farmers manage stock and feral pests on huge properties.  Many have been licensed to own and use pistols in these difficult conditions for decades.  Daniel Salmon is one such farmer, as the headnote to his win recites:

Mr Salmon had obviously owned and used a pistol on his large property for a long time.  When he went to renew his license in 2017, Weapons Licensing tried to bully him out of his renewal.  We’ve documented Weapons Licensing’s bullying tactics on this issue (click here).  Mr Salmon was undeterred and engaged solicitors Robert Bax & Associates to pursue a review in QCAT.

Weapons Licensing tactic: throw up every argument against the applicant

Weapons Licensing have a standard practice in QCAT of throwing up every argument against applicants, no matter how poorly conceived or irrelevant.  Member Clifford’s reasons inform us:

The applicant confirmed in cross-examination he did not know of the fold down rifles as suggested by [Weapons Licensing] and that he had never tried the rifle carrying equipment identified by [Weapons Licensing]. But whilst he opined they ‘still may get tangled up’, he agreed they ‘may work’. However, the applicant further testified that he spoke with other farmers who found a pistol the most convenient

[Weapons Licensing], citing and relying on the cases of Geary, Harm and Shaxson, submitted that the applicant had not made out a necessity to use a concealed weapon, that the majority of the property was accessible and that the applicant had not tried the fold-down rifles and had only discussed alternatives with neighbours. [Weapons Licensing] further submitted that neither, the terrain or special circumstances existed that made it impractical or impossible for the applicant to use alternate weapons

Dangers in the Mulga

The applicant’s property contained a large area of Mulga.  Stock took refuge in it, feral pests hid in it.  Member Clifford accepted the applicant’s evidence about these dangers:

Whilst only 1/3rd of the property is Mulga this part of the property constitutes around 20,000 acres, a large parcel of land in its own right. The livestock are attracted to the Mulga for fodder particularly in the current drought conditions, and hide there when mustering is in commenced. Charging feral pigs and wild dogs, both a threat to the livestock, also hide in that terrain. The applicant wants to control the negative impact these animals have on his livestock and his business. He testified that a motor bike is the only way he can access the Mulga and that alternate weapons to his Smith &Wesson pistol are impractical to use given the charging nature of feral pigs and the need to get a shot off quickly to eradicate the pests in a safe manner.

Weapons Licensing was told to give the man back his license

Answering questions last year on the floor of Parliament about the war on farmers, Mark Ryan called Weapons Licensing, ‘the experts’ and backed their ideological judgments about public safety.  What public safety was safeguarded by confiscating Mr Salmon’s license, only to have QCAT see his obvious need and reinstate that license?

Queensland Labor hates farmers almost as much as it hates guns.  Weapons Licensing has been only too joyful to carry out the anti-firearm, anti-farmer agenda.