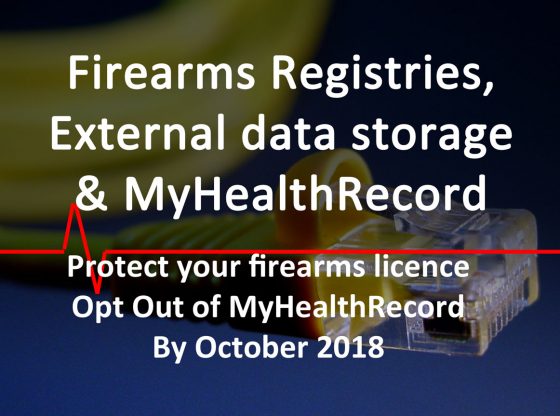 Firearms registries are exchanging data about you with other agencies

To avoid being the victim of overzealous bureaucrats, mistakes or worse, you need to:

Stop your health data being shared with Firearms Registries who will comb it for an excuse to take your license.

This is the first in a multi-part series on information exploitation by the Firearms Registries.

Part 1: Reasons you shouldn’t own particular firearms are easy to conceive

Have you ever gone to the doctor to talk about a difficult (maybe depressive) period in your life?  Had a serious workplace accident?  What about a serious infectious disease?

Every had back trouble?  Ever had shoulder surgery?  Ever had a concussion or head injury?  How are your knees and hands doing?

Conceivably, these are all reasons for some of the fevered imaginations at your State Firearms Registry to look into two major looming issues about you:

Most shooters stop at the first issue.  They say, “yeah, I’ve had a bad back, but my reason for having a license is still good.”

But what if they start raising doubts over your suitability to own particular firearms that they don’t like?  Let’s look at two scenarios.  These may not be scenarios that play out, but the logic of them is inescapable: whatever you have can be taken.

Bob owns a .338 Lapua Magnum rifle (or a .300 Win Mag) that he uses to shoot buffalo, camels and deer at long range.  Bob lives way out west.  This year, the Australian Self-Appreciation Society of Firearms Registries decided they don’t like big rifles because one of them might be used in some nefarious way.  Let’s get ’em out of circulation as much as possible.

Bob gets told he needs to show cause because he’s had major back surgery.  Either provide a surgeon’s report that he is fit or dispose of his big rifle.  It’s hugely inconvenient for Bob to get a surgeon’s report because he lives 400km from the nearest back surgeon.  It’s going to cost Bob money.  Or he can contest it in QCAT = money + time.

Alan owns a .44 Magnum for metallic silhouette.  Alan fractured his hand during re-fencing at his uncle’s farm.  There were post-treatment complications.  Alan reckons he’s OK to keep shooting, but Weapons Licensing is on a quest to get rid of .44 Magnums (perhaps because they don’t like the Dirty Harry series).

Alan gets told to show cause that he still has a genuine reason to shoot high calibre because their ‘experts’ say he would definitely need two capable hands and clearly one of his hands is weakened.

Alan now needs to get a doctor with specialist accreditation to certify that both of his hands are at full strength.  Or he can contest it in QCAT.

Many State Governments, including Queensland Labor, are on a quest to eliminate particular firearms from ownership (click here for Weapons Licensing’s War On Farmers).  Police series will have full and free access to MyHealthRecord.  If not today, then tomorrow.

You’re just a number whose time is waiting to come up.  Opt out now.