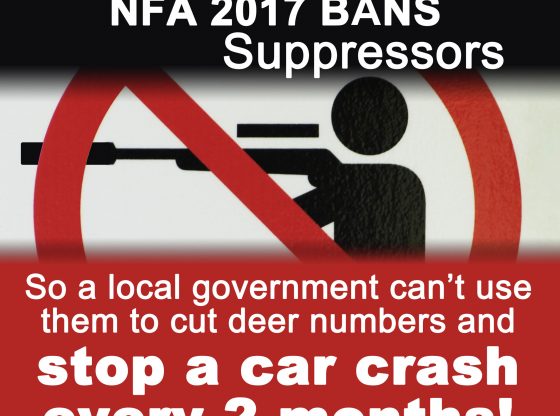 A few days ago we explained how the largest local government in Queensland was blocked from using sound moderators by Queensland’s Weapons Licensing Branch. Feral deer are causing a stream of vehicle accidents.  To get to the bottom of this, Councillor Bourke wrote to Queensland’s Police Minister Mark Ryan in late 2016.  Mark Ryan wrote back in January 2017 and said the NFA bans suppressors.  We thought we’d give local government a hand and ask the obvious questions for them.

In November 2016 Councillor Matthew Bourke wrote to Mark Ryan (Police Minister) in his capacity as Chairman of a Brisbane City Council (BCC) Committee. He was asking the Minister to support BCC’s use of suppressed firearms to cull feral deer.

On the evening of the 19 June 2010 … a motorist [collided] with a large stag on the inbound side of the Centenary Highway at Jindalee. This incident had the potential to … be fatal for the motorist involved.

I agree […]. If current legislation does not allow [this] I would also support a change to the Weapons Regulation 1996, to allow this to occur.

Minister Ryan’s letter back to BCC

The Queensland Government remains committed to the National Firearms Agreement, which can only be changed with agreement from all States and Territories. Therefore, the Queensland Police Service Weapons Licensing advise that they are unable to issue a license or exemption for a [suppressor].

The National Firearms Agreement 2017 doesn’t mention suppressors (or ‘sound moderators’ or ‘silencers’). Suppressors are increasingly used (quite legally) in Victoria and NSW.

Minister Ryan is right that sound suppressors are classified ‘Category R’, but it is a untrue that the Weapons Act doesn’t allow exemptions to be issued to allow BCC to use suppressors.  Weapons Licensing has previously considered and then knocked back an application exemption from the Council on the grounds that public safety didn’t favour suppressors.  Someone is making up fairy stories.

Will the Premier explain: