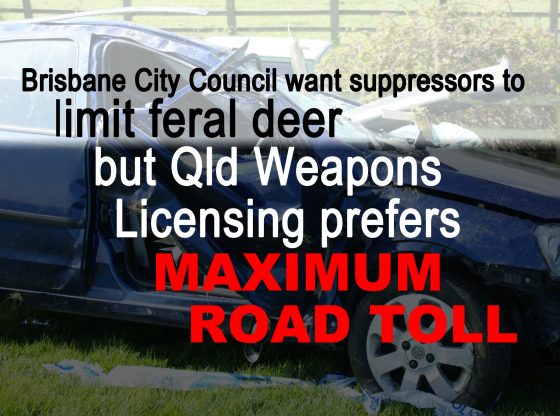 Brisbane City Council has a feral pest management plan, but they have a problem with one of their most successful techniques, called “ground shooting”.  The problem is: .308s ARE LOUD!  In documents released under the Right To Information Act, we know Brisbane City Council have worked for over five years to get an exemption from Queensland’s Weapons Act to use suppressors.  Writing to the then Police Minister and the then Agriculture Minister, Council explained:

To control and reduce this [deer] population, it is considered necessary that at least 100 animals need culling annually.  Current management efforts [are…] insufficient to stop population growth.

While trapping and exclusion fencing are effective management tools, ground shooting remains the most effective. […] The use of a silenced rifle will minimise the scattering effect allowing for multiple efficient kills.

The Agriculture Minister of the day, Dr John McVeigh, wrote back:

I agree […].  If current legislation does not allow [this] I would also support a change to the Weapons Regulation 1996, to allow this to occur.

Not for the Queensland Gun Police.  Brisbane City Council had applied for an exemption to allow them to possess and use silencers.  The Gun Police, refusing to grant the exemption, wrote back:

The discretion [to grant an exemption] should only be exercised where the object of the Act is not threatened.

We think they might have forgotten that object of the Weapons Act (from s 3) is about ensuring public safety:

the need to ensure public and individual safety

Public safety would be pretty well served by taking deer off urban roads!

Not one word of the Gun Police’ written reasons for decision explains what risk would be created by long-serving, experienced Brisbane City Council pest controllers – who’ve safely used firearms for decades – using suppressors so that those firearms were slightly less noisy.

When the Gun Police have an ideological objection to something, reason doesn’t matter.

Check back on lafo.com.au for the next instalment of Brisbane City Council’s low-key but public-safety-minded effort at pest control.  In 2017, it links up with the Weapons Licensing Branch’s War on Farmers…

Minister: we banned the WFA-1 and we don’t know why
NSW banned lever shotguns, why aren’t they banned in Qld?