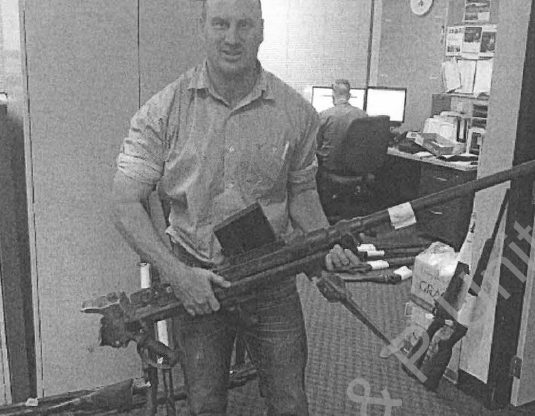 Three months ago, we described the pantomime put on by Queensland Police Service (click here) where old firearms surrendered by a retiring licensed collector were put on display as though they were bravely seized by Police from the armoury of organised criminals. Queensland Labor’s Police Minister, Mark Ryan, reportedly made wonderfully misleading statements:

The number that we’re concerned about is the number of illegal weapons in the state, and that’s why we have operations  like this targeted operation but that’s why also the Queensland Police Service continues with its proactive steps to ensure that anyone holding a firearm illegally disposes of that firearm appropriately.

The Police Commissioner and the Minister had their photos taken alongside rusting relics, projecting the image of strong leaders safeguarding the community. You can see a video of their misleading statements here. Further documents released under the Right To Information Act reveal how QPS organised this media blitz (click here). On 8 February 2018, the Commissioner’s Chief of Staff wrote to the Media Director:

Arising out of this morning’s briefing with the Commissioner – there is an intention to push out some positive media on these operations and involve the Min.

Police Minister Mark Ryan was only too keen to prance about for the cameras. On 26 February 2018, the QPS Media Director appears to have written to an unknown journalist:

The operation which commenced on February 1 and is focused on removing illicit weapons from our communities and preventing firearms related offences, has already resulted in the recovery of 869 (as at Feb 25) across the state.

An early draft of the planned media release appears to “blame” licensed firearms owners for illegal criminal acquisition of firearms. On 23 February 2018, the Chief Superintendent of State Crime Command appears to criticise the drafting:

The wider problem with this whole media event is that it conflates organised criminals with the 200,000 law-abiding, licensed firearms owners in Queensland.

The presentation of the “seized” “illegal” firearms is so cynical that one Police member suggests staging a rural photo shoot with the firearms. You can’t make this up:

That said it would be nice to do something with a more regional background and the suggestion was that perhaps we could take the firearms to Forest Hill which is outside of Ipswich (about 30 minute drive) and do it there. My preference would be to do the Forest Hill thing as it would provide some context around where the firearms where located and the issue we have with the theft of firearms from our regional areas, however its not lost on me that it would take some time for everyone, including the commissioner to get out there and back.

And after hearing the Commissioner couldn’t spare the travel time, the witty retort came back:

Yes I thought that would be the case. I’ll pick up some sugar cane mulch and spread it around

Law abiding shooters are fed up with politicians who are eager to mislead and quick to smear a huge community of people who generally cause no crime whatsoever.

Questions for your local MP

1. Why does the Police Commissioner pay so many people to arrange carefully staged photo shoots that mislead journalists
and the public about firearms that were surrendered by a retiring licensed collector?

2. Is this sort of charade a good use of public money?

3. Can’t you ask Mark Ryan a question in Parliament about this?