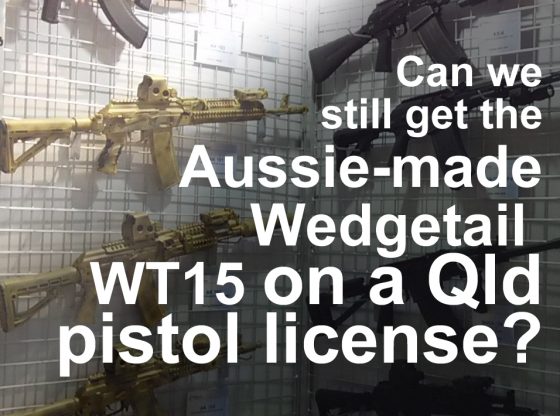 Queensland Weapons Licensing are confused by the Wedgetail WT-01

A few Queensland shooters applied for permits to acquire the Wedgetail WT-01 pistol for competitions, such as metallic silhouette, received a permit and spent around $6,000 on a fine Australian-manufactured firearm.  This isn’t a trinket or something people acquire on a whim.  It’s a quality, hand-built firearm, and one of a million registered firearms in Queensland.  It isn’t hurting anyone.  Now those owners are getting letters demanding the surrender of a firearm they were permitted to acquire and own.

Queensland Weapons Licensing looked into one application for a Wedgetail WT-01 last year and sought advice from the Australian Criminal Intelligence Commission on ways to ban it.  You might imagine the ACIC fights crime, but they have a special unit to give advice to firearms registries on how to ban guns that are typically lawfully held.  They were integral to the earlier ban of the Warwick WFA-1 in Tasmania (click here).  Here’s what ‘G’ of the ACIC, likely Garry Fleetwood (former lobbyist for the SSAA and international presenter, click here), wrote last year (June 2017) in documents released under the Right To Information Act:

This confused the Weapons Licensing Branch.  One of their senior sergeants eventually (April 2018) put in a request for the forensic services to help classify the firearm.  In his request, senior listed his very first ‘Issue’ as:

Weapons Licensing is staffed by multiple staff members who do not have a high level of weapons knowledge.

That’s right: the number one issue at Weapons Licensing is that staff do not know about weapons including, by inference from what they regulate, firearms.

There’s an expert report, that will help! (Maybe not)

With this sort of report, the dispute is sure to go on until a court resolves it.  Ask your local MP why, for $11m/year, Queensland Weapons Licensing can’t identify or categorise firearms without further supervision.  Firearms registries are costing us a lot of money for not very great results.