Qld Weapons Licensing videos your home as evidence during inspections 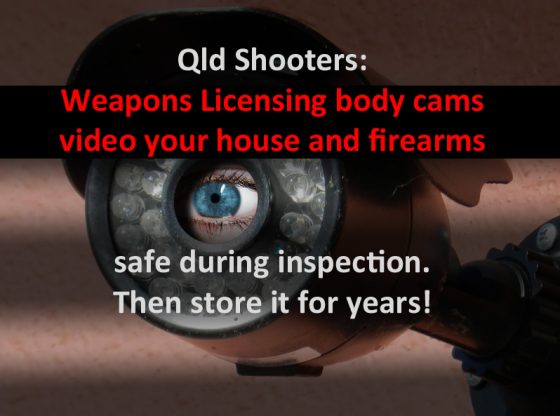 A few months ago, we wrote about the disturbing assertion from QPS that they can enter shooters’ homes at any time (click here). Then we received reports that Queensland Police Service was taking and storing body camera footage inside shooters’ homes during routine firearms safe inspections.

The time for which QPS stores this footage varies, according to Sgt Chan, based on whether breaches of the Weapons Act 1990 (Qld) or commissions of other crimes are suspected. Sgt Chan explains that admissions shooters make, recorded on camera, are also of interest and of evidence in prosecution or in action to revoke your license.

We put it to Sgt Chan that licensed shooters were heavily vetted and pretty unlikely to have a criminal record. We suggested maybe it is unnecessary and unfair to record the homes and safes of people who aren’t suspected of anything and who haven’t done anything wrong. Sgt Chan was unfazed by this and referred us to the QPS policy on body cameras.

Sgt Chan made a particular point that the QPS policy on body worn cameras would not differ between any storage inspection and any QPS encounter in the street. The policy would not ‘call out’ storage inspections specifically and footage in your home is at the discretion of the QPS officer involved.

Sgt Chan explained that cameras “automatically upload” footage each day when recharging. We understand all footage is saved offshore (outside Australia) at evidence.com

Email Weapons Licensing and the Minister. No more cameras in homes during routine inspections!
Bust.DanielW@police.qld.gov.au
police@ministerial.qld.gov.au

QCAT ruins life for more shooters: Weapons Licensing can ‘recategorise’ (ban!) your firearms even after you have a PTA.
Can Police shoplift and also reprimand shooters? Yes we can!