Crime Commission presentation to INTERPOL shows theft from licensed owners is NOT the major source of illegal guns; so why are we always hearing thefts are the problem?

Home /Featured, Firearms registries, National Firearms Agreement 2017/Crime Commission presentation to INTERPOL shows theft from licensed owners is NOT the major source of illegal guns; so why are we always hearing thefts are the problem? 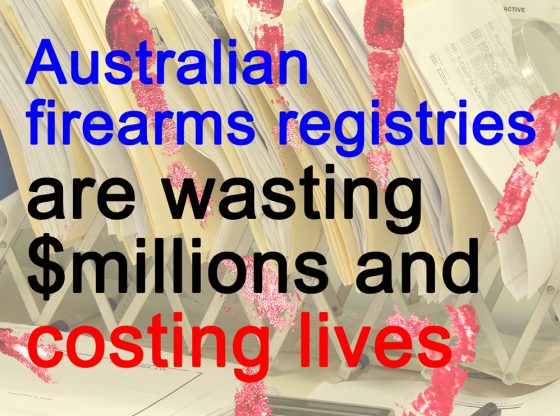 Last week LAFO accessed new Australian Criminal Intelligence Commission (formerly Australian Crime Commission) documents under the Freedom of Information Act.  They reveal the Federal Government’s knowledge that a few hundred thefts of guns from law-abiding licensed firearms owners each year are not the major contributor to black-market firearms used by criminals.  In a Powerpoint presentation, they admitted to INTERPOL:

The gray market is part of the illicit market and primarily comprises of long-arms that were not registered in accordance with the 1996 National Firearms Agreement (NFA).

Due to compulsory registration of handguns long before 1996 Handguns are not regarded as part of the gray market.

The ‘gray market’ is made up of hundreds of thousands of firearms not handed in during Saint Howard’s multi-Billion dollar buyback in 1996.  Compare this to the tiny number of thefts from licensed owners annually.

So why do we keep hearing the story about how thefts from licensed owners are the major source of guns for crims?

It’s because the Crime Commission has a ‘model’ for illicit firearms and they don’t explain it well.  Our illustration:

If you consult the ACC submission to the Senate Inquiry on Firearms in 2014 (click here, 7Mb), you’ll see that the relative contribution of illegal firearms from the “gray market” and theft aren’t discussed (paragraphs 11 to 16). Theft from licensed owners is touted as a major cause:

This is misleading, because without clarification of the relative sizes of theft (which is known to be very small – under 1,600 in any of the past ten years) and the gray market (which is well over 250,000) it sounds like thefts are the problem.

This sort of misleading presentation from government agencies is a major driver of the continued media scare campaign about thefts from licensed owners. The ACIC needs to do a better job of explaining that thefts are tiny and the gray market, according to it’s own presentations to INTERPOL, is HUGE!

Two questions for your local Member of Parliament:

#1 Are my tax dollars funding a federal ACIC bureacracy that is keen to present licensed firearms owners as the problem?

#2 Why didn’t the ACIC submission to Parliament clearly explain the gray market is the overwhelmingly large body of illegal firearms?

You can access four of the ACIC/ACC presentations here: