Ammo limits and other red tape that won’t go away 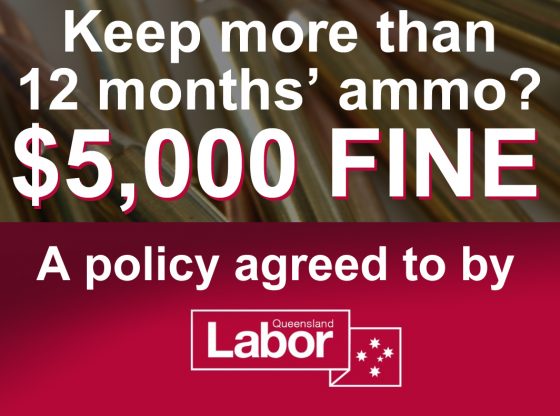 If you’re a law-abiding shooter, you should know by now that the National Firearms Agreement 2017 contains lots of nasty plans.  Far from being a simple endorsement of the Howard-era licensing and registration system (as reflected in the NFA 1996), the NFA 2017 contains ‘harder’ language in almost every paragraph.  Each paragraph is a policy bomb.  Waiting to be detonated into new law and new bureaucracy when a key event happens.

An event or scenario will take place.  Then the Fairfax and Murdoch newspapers and the anti-gun left will scream “We must implement this for public safety.  Think of the children!”

There are always lazy, fear-mongering politicians like John-Paul waiting to leap onto the front page of the Gold Coast Bulletin and suggest licensed firearms owners are causing violence with registered firearms.  JP didn’t provide an example, of course.

LAFO volunteers recently accessed Queensland Police documents under the Right To Information Act that reveal ammo limits were investigated as far back as the former Liberal government of Campbell Newman.  Exactly as we warned before the 2017 Queensland election, there is a proposal to transfer responsibility for ammunition sales regulation from Queensland’s Department of Mines to the Queensland Police Service.

The only thing delaying the imposition of ammo limits is the challenge of figuring out a way to implement limits that won’t cripple the QPS paperwork brigade at Charlotte Street.  South Australia has already figured out how to limit ammo: don’t track it but make law-abiding shooters prove their innocence instead.

What never takes place is a reckoning of the cost per year of all the bureaucracy and red tape that comes out of mad National Firearms Agreement policies that do nothing for public safety.  Here’s some key facts that suggest what the bulk of the system – Category A & B registration – is costing over the long term.

Despite all the money poured into the licensing and registration system, Weapons Licensing currently have this notice on their website as at 14 January 2018:

Important Notification
Please note there have been unforeseen delays in the printing of licence cards with issue dates from the 23rd of November 2017 onwards. These have now been printed. However due to delays with postal services these are not expected to be received until after the holiday period.

The registration of Category A & B long-arms, which includes air rifles, bolt-action rifles and single- and double-barrel shotguns is consuming the resources it would take to run a couple of regional hospitals.  The individuals who hold the firearms can be licensed, but most of the paperwork is in registering the firearms.  Has all the red tape solved a single crime?

You can change this

Why not use some of these points to ask a Queensland politician what benefits are accrued from the huge outlay of taxpayer dollars?  If you’re in another State, you can still ask the same questions.  Maybe you could access government information through the Freedom Of Information or Right To Information Act in your State.  Send an information application your firearms registry today.