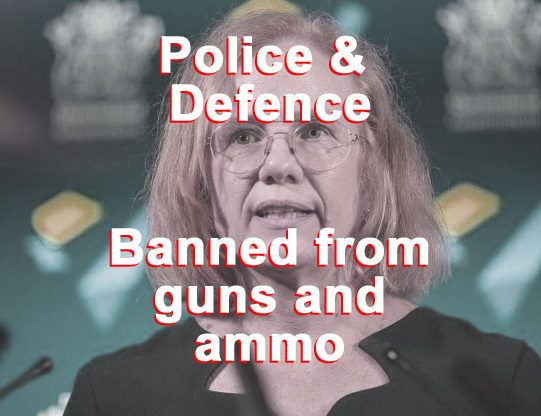 On 27 March 2020, the Australian Defence Force’s East Coast Tactical Assault Group and Queensland Police Special Emergency Response Team were forbidden from buying weapons, ammunition and other equipment to train and respond to a terrorist incident.

This wasn’t an accident. It was a regulation design by Queensland’s Department of Premier and Cabinet and implemented by Queensland’s Chief Health Officer. It was done under a brand new power to respond to Covid-19.

Why? In recent years, Australia had dealt with a rash of terrorist incidents in its capital cities. Two out of a dozen examples: Trolley Man foiled a Melbourne Islamist, limiting the death toll to one, while the Martin Place Siege in Sydney resulted in further tragic consequences thanks to an Islamist armed with an unregistered shotgun.

Queensland Labor gives a doctor the power to shut business

On 27 March 2020, Queensland’s Chief Health Officer (CHO) made directions closing all firearms dealers under the Public Health Act. Queensland’s Parliament had only amended that Act a few days before to add Part 7A, conferring a range of extraordinary powers on the CHO.

Section 362B of the Act gave the CHO the power to make directions restricting the movement of people and to effectively shut businesses. Dr Young, the CHO, could only exercise these powers in certain circumstances:

Failure to comply with directions is an offence with maximum penalties exceeding $10,000 and six month’s imprisonment. Offending is not for the faint-hearted.

On 23 March Dr Young, the CHO, made her first set of business directions under Part 7A. They were amended on 26 March to shut swimming pools and nightclubs. The next day all firearms dealers were ordered not to trade further (Directions No. 3).

You might ask how the spread of Covid-19 was slowed by closing firearms dealers while general retail stores were left open. This question is difficult to answer.

Documents we accessed under Queensland’s Right To Information Act reveal the dramatic effects of the dealer closure and put in question whether the dealer closures were even motivated by slowing the spread of Covid-19.

Defence and police were banned from accessing ammunition and equipment

Queensland Government documents reveal that Queensland Police’s Tactical Unit and Australian Defence Force anti-terrorist response teams were banned from purchasing ammunition and equipment. These are required for training and response to threats secondary to a pandemic and civil disorder. Queensland Premier Anastasia Palaschuk’s department was the principal architect of the closure of firearms dealers that could supply these items. They were prepared to imperil Australia’s anti-terrorist capability. Let’s see their documents.

No State of Australia with a non-Labor government has closed firearms dealers. The seriousness of this can’t be overstated. The Queensland Premier’s Department laid the groundwork for terrorists to mount a successful attack on the Australian public. If a politician or official develops a regulation that forbids the anti-terrorist capability of the police and defence from accessing ammunition and equipment to respond to terrorist threats, then that action on it’s face looks very much like enabling terrorism.

There are very real questions to be answered by the Queensland Premier and by Queensland’s CHO. Why would they make a regulation forbidding the police and the Australian Defence Force from accessing supplies that are critical to Australia’s anti-terror capability?

Senior government officials reveal their bizarre thinking that domestic violence would be reduced if licensed, vetted firearms owners could not purchase more firearms and ammunition. This seems strange given that there are significant waiting periods for licenses and permits being issued, and the fact that most licensed shooters already have a meaningful amount of ammunition stored at home.

Questions for Queensland Premier and CHO

Challenging gun shop restrictions: realism vs hyperbole
Qld Labor Lockdowns: businesses are on their own