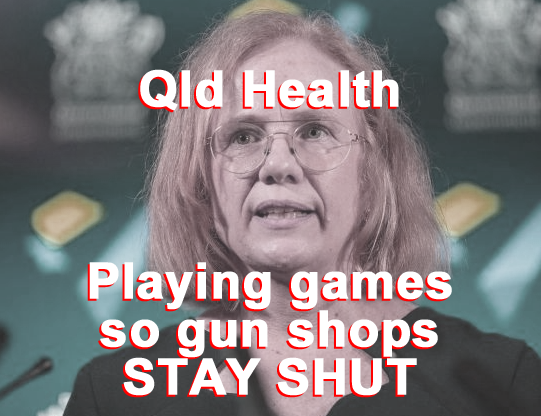 LAFO has said a bit in the last few weeks (click here) on the use of public health directions to close firearms dealers in Queensland.

The United States of America, the great and glorious home of the Second Amendment, where possession and use of firearms are a next-to-inalienable right, has 850,000 cases of a virus that is widely recognised as far more contagious than the flu and maybe more deadly. If you follow the curve of the last few weeks, over a 100,000 Americans will die from this in the coming months. We don’t know just how many will die.

Freedom and responsible ownership of firearms remain a significant issue, but shooters would be tone deaf to think that courts are going to overturn public health restrictions in the face of a situation that is being described by officials and media as dire. In short: going to court in Australia to challenge gun store closures is unlikely to work. *Boo*hiss* you say. But why is this so?

The Government can re-make the restriction

In the midst of this, the grandly-named National Shooting Council has sought new members and threatens legal action in Victoria and Queensland. The NSC, while seeking new members on social media, boasts this week to the Queensland Government “we’ve taken your Chief Health Officer to QCAT.”

This is a rousing call to litigation. And Neil Jenkins is a rousing figure leading the NSC. The only problem is that QCAT cannot hear challenges to public health directions. The chest-beating, like the claimed legal action, is misplaced.

NSC calls for donations. They want your money. You should think twice before donating for the following reasons.

There seems to be no power under the Public Heath Act 2005 (Qld) for QCAT to review public health directions made under Part 7A for the current Covid-19 situation. We are left wondering whether their putative legal action is a just a stunt. It appears to be an announcement that can’t actually result in meaningful outcomes or change.

The only review option against the Chief Health Officer seems to lie under Queensland’s Judicial Review Act, with a hearing in the Supreme Court and tens (or hundreds) of thousands of dollars in legal fees. All for what? A new set of directions to be issued, even in the unlikely event of a win?

A few organisations in Queensland lobbied hard to get the complete closure of gun shops rolled back in Queensland so that farmers and pest controllers could still operate. This was a meaningful win. Maybe a next step involves a shooting range operator putting together a ‘social-distancing’ plan to operate a shooting competition at a range. That plan could be put to Queensland Health to seek an exemption from the current restrictions. It could form a pattern for other ranges to copy.

Doing hard work like like forming a range plan to deal with Covid-19 is a far cry from sabre-rattling about going to a tribunal (QCAT) that:

Let’s be realistic and formulate realistic plans. Talk to your range officer about making plans to shoot with social distancing. That might get ranges open for sporting shooters.