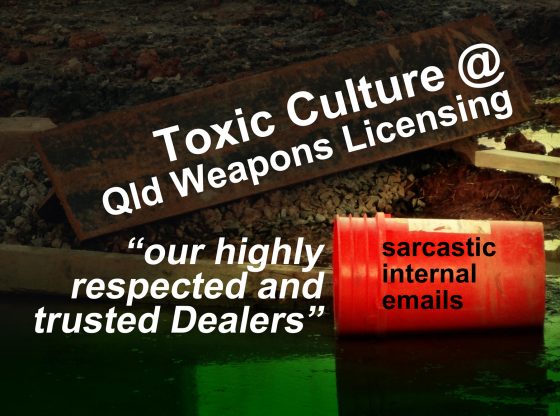 Some sporting shooters applied for a permit, paid a fee to Queensland’s Weapons Licensing Branch, fully described the firearms they intended to purchase and received their Permits To Acquire. They took their permits to dealers, who duly processed the permits and sold them their firearms. Then the Gun Police had second thoughts about the permits. How did a Senior Sergeant of the Gun Police describe shooters and dealers filling out forms honestly, paying their fees and complying?

The Senior Sergeant in question wrote this to the Inspector running Weapons Licensing Branch and to a number of other senior staff. Not only does Senior exhibit sarcastic contempt for Dealers, but he does so openly in front of his boss and other senior staff. This tells us that it is cultural and that the Inspectors, Sergeants and Senior Sergeant running the branch approve this attitude.

We would normally write to the Police Minister, Labor’s Mark Ryan, and complain about this sort of thing, but it is an attitude and approach that Queensland’s Labor Government has repeatedly supported.  Whether you’re taking firearms off farmers or stopping ANZAC Day reenactors who’ve been doing it safely for decades, you should do it with a contemptuous attitude.

If this is what they say in writing, what did they say verbally about your latest application in the tearoom?

Farmer has firearms for 30 years. Labor took them off him.
SSAA Qld Shot Show could be a pro-NFA Labor-fest