Firearms owners are sick of it: stop punishing us with dumb red tape 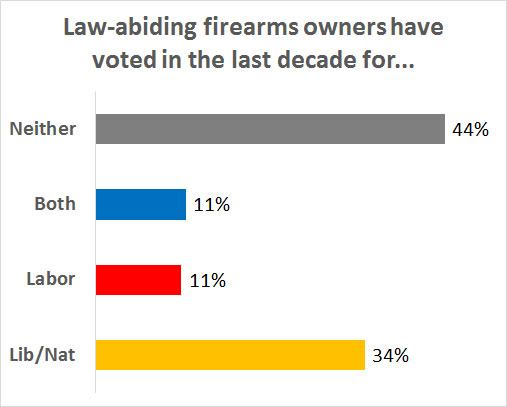 Law-abiding firearm owners (LAFOs) are a diverse bunch of several hundred thousand folks from all walks of life. We recently surveyed LAFOs through a survey linked from Facebook. The survey was open for 30 hours, shared widely and received 891 responses.

The Liberal, National and Labor parties have gotten used to thinking of shooters as voters they can ignore. LAFOs are voters they don’t need to waste their time speaking to or dealing with intelligently. Our survey reveals this is a big mistake.

Politicians and an anti-gun media like to console themselves with myths and oversimplifications. Let’s explode some myths with the facts.

Fact: 22% of respondents had placed Labor at #1 or #2 on a ballot paper in the last ten years. (Previous) openness to Labor was highest amongst those under 35. 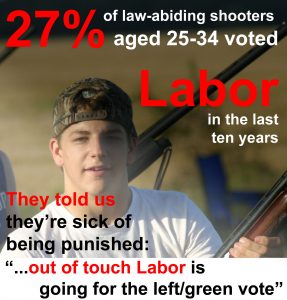 Those who have previously voted Labor were angry with the positions Labor has taken:

“I never took too much of an interest in politics in years gone by, but now I take an interest and make my decision based on how a political party’s policy will affect my life directly. I am very passionate about shooting and hunting and therefore am p****d when I am punished and vilified by a political party that doesn’t care about my way of life. Why would I want to vote for someone that doesn’t care about the same things I care about?”

Fact: Just 45% of respondents voted Liberal or National at #1 or #2 on a ballot paper in the last ten years. 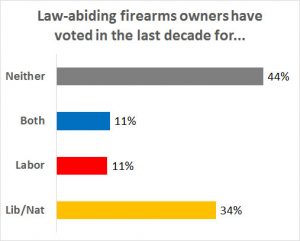 Many of the comments indicated it was the Nationals and not the Liberals who were being voted for.

“Labor and Liberals are both openly hostile towards LAFOs. The Nationals are okay, though they’re not big enough to implement anything lasting.”

“Only some Nationals have a real awareness of firearms. The policies of the major parties have led me to vote for minor parties for the last couple of elections, and I will no longer vote for antigun parties.”

Don’t let the comments above fool you, the tone of most comments about the Liberals and Nationals was one of great and abiding disappointment:

“Using firearms owners as an emotive political target to appease the ill informed.”

“I feel they need to focus on criminals not responsible gun owners.”

Fact: They don’t and we received lots of comments indicating the red tape and regulation is misdirected.

“Firearm laws are designed to persecute people who are doing the right thing.”

“Over restrictive need to consider LAFOs in their policies.”

“[They] Pander to fear mongering and believe more laws somehow will stop criminals.” 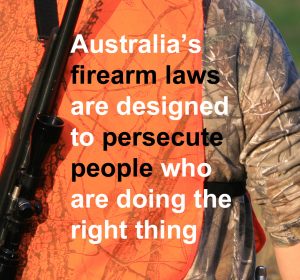 The great majority of respondents did not seem pleased with current red tape, but even those who were supportive of the 1996 reforms saw further regulation as opportunistic politics:

“This country has the best firearm laws / legislation in the world because the work was done years ago. Time spent by pollies on this now is just taking them away from the real issues and concerns of the country because it’s easier to create fear with the PC uneducated over opinionated trendies of today.”

Fact: Just kidding, LAFOs really, really don’t support the Greens, who are rightly the subject of near-universal derision. At least some things are predictable.

Other background about the survey