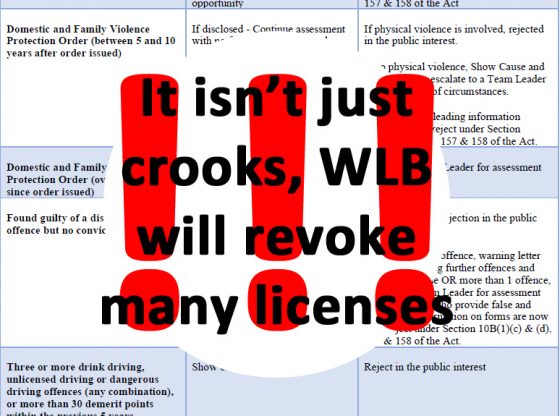 In the wake of the highly political anti-shooter audit report into Weapons Licensing (click here) that recommend sweeping changes to the licensing system, Queensland’s Weapons Licensing Branch have announced new assessment ‘Guidelines’ (see table at the bottom of this page). Before you assume these won’t affect you, it’s worth unpacking the implications, including:

1. Proposed changes to the Weapons Act

The Queensland Audit report proposed some dreadful changes to the Weapons Act, including automatic license revocation for trivial offences like minor storage violations (eg ammo overlooked in the boot of your car). Please email or better still phone the Police Minister and your local MP before these crazy ideas make it to the floor of Parliament.

One of the most notable changes in attitude in the guidelines seems to be WLB taking a very hard line on applicants who it thinks have provided false or misleading information. WLB are saying that renewals and applications will be automatically rejected on this basis. On the surface, this seems reasonable: why should people get away with lying?

We’ll refer to the current Weapons License application form, which we’ve saved on our website here for posterity (click here).

However, if you compare the license application form to previous versions, you’ll see the questions have gotten wider and wider over the years to the point where even the most honest person is quite likely to make a mistake about something.

A good example is “medical” conditions. The current form asks:

Have you ever suffered from the following conditions?

If you have taken a long time to get over a death in the family, you’ve probably had an emotional problem. If you have broken an arm or a leg – or have a long term back condition – you’ve suffered from a physical impairment. This question used to say ‘Have you received treatment for?’, but instead it now says ‘Have you suffered…?’.

If you are brutally honest and tick ‘Yes’ to either or these questions, then the form demands you get a report from a doctor or shrink and a complete history and their opinion you are fit to have a license. That’s onerous when you’ve only had a relative die or broken bones.

If you gloss over this question, you’ve just given false or misleading information in your application. You’ve been made guilty by sweeping, onerous and unnecessary questions. Weapons Licensing like this outcome.

These progressive changes in the application and renewal forms are not an accident. When you read these together with the Queensland Audit report and the expansion of reasons for automatically rejecting your application, you can see that Weapons Licensing are playing the game of maximising the number of faults they can find with each applicant. They are looking for catch-all reasons to reject the maximum number of applications.

What does the Weapons Act say about false or misleading information?

In the new Guidelines (bottom of page), Weapons Licensing refers to these sections of the Weapons Act:

10B Fit and proper person—licensees
157 Fraud and unlawful possession of licence etc.
158 False or misleading statements

Section 10B sets out the decision-making power that Weapons Licensing Branch use to grant (or refuse) licenses and renewals. Section 157 and 158 contain offence provisions (you can be charged if you provide false or misleading information) and reiterate the common law idea that any license obtained through fraud or serious misrepresentation is void.

Section 10B is important. It provides:

To paraphrase: what you said in your application can be scrutinised; Weapons Licensing can assess whether they have reason to believe anything you’ve said is misleading. That’s fair.

However, what Weapons Licensing have said in the Guidelines is quite different to that. They write:

Applicants who provide false and misleading information on forms are now auto-rejected under Section 10B(1)(c) & (d), 157 & 158 of the Act

Instead of explaining that making misleading statements (even accidentally) in one of many factors that can be taken into account (and that accident or forgetfulness is a genuine and exculpatory factor), Weapons Licensing are proposing to flatly reject applications. Rapid-fire decision-making with hard rules that are not present in the Weapons Act is a dangerous path for administrative decision-makers (like Weapons Licensing Branch) to take. It can backfire badly.

3. Auto-rejection for ‘no conviction recorded’ offences

One notable change to the Guidelines is the intention of Weapons Licensing to automatically reject any application or renewal where the applicant has been found guilty but not convicted of a disqualifying offence (being an offence involving weapons, drugs or violence).

Examples of these sorts of offences could routinely be:

With no other criminal or psychiatric history, these examples are ones where there is no reason to automatically refuse a firearms license. Indeed, the Weapons Act currently only provides for automatic refusal where a conviction is recorded (the Magistrate thought the offence is of some gravity).

Weapons Licensing now say they will automatically reject your license application as ‘not being in the public interest’ even where the Magistrate deliberately decided not to record a conviction.

People who have committed an isolated, minor infraction of the law are not automatically criminals. Even QCAT (the Queensland Administrative and Civil Tribunal) which hears appeals from Weapons Licensing decisions, agrees!

In Avenell v Queensland Police Service Weapons Licensing Branch, an applicant of otherwise good character stored a rifle outside a safe, but no conviction was recorded. QCAT reinstated the license, which had been revoked by Weapons Licensing.

See how Weapons Licensing have tried this nonsense before and been rejected? Good thing they’ve got an Audit report to lecture them about public safety from a position of no direct experience, knowledge or expertise!

In Schrodter v Queensland Police Service Weapons Licensing Branch the applicant had been charged by the police for growing (and thereby possessing) cannabis. The applicant pled guilty, was fined $1500 but was not convicted. The applicant received a notice revoking his licence and applied to QCAT for review of the decision. The lack of conviction meant it was open to the tribunal to find the applicant to be a fit and proper person. Senior Member Oliver held:

The Applicant has established that other than these offences, he is otherwise of good character. … The Applicant co-operated with police in terms of their investigation, entered an early guilty plea and had shown
remorse. … All of the above, supports the conclusion that his involvement in growing the plant was an aberration and not consistent with his overall good character. … I have come to the conclusion that the
Applicant is a fit and proper person to hold the license and in doing so, and in granting him such license would not undermine the purpose of the Weapons Act particularly given his need to control vermin and pests on his small farm. I also conclude that despite the offences under the Drugs Misuse Act it would not be against the public interest for him to continue to hold the license.

In Richmond v Queensland Police Service – Weapons Licencing Branch, a long-term license holder had accidently left his rifle for two weeks on another property on top of a cupboard. This was tragically used in a suicide – but the licensee was of good character and no conviction was recorded by the Magistrate’s Court. QCAT reinstated the license, which had been revoked by Weapons Licensing.

The Queensland Audit Report proposed that the Weapons Act should be amended to make these offences, where no conviction was recorded, automatically disqualifying.

Weapons Licensing have not waited for Parliament to change the law. They’ve decided to ignore the manner in which these offences (in isolation) do not automatically trigger a license revocation. Instead of waiting for MPs – who you elected – to amend the Weapons Act, they’ve taken it upon themselves to auto-reject these applications: as though the law had already been changed.

This was likely driven from a more senior level than the Manager of Weapons Licensing. The Commissioner of Police, or a Deputy or Assistant Commissioner, has decided that they don’t need to follow the statutory process set by Parliament. Someone is building a career or legacy.

As the underqualified stooge appointed by the corrupt Premier Joh Bjelke-Petersen, Terry Lewis would approve of this circumvention of statute. Who needs Parliament to make specific rules on specific issues when we can invent an administrative policy that ignores the rules Parliament made?

This post, we covered three key issues. Next time:

If you receive a revocation or suspension notice under these new Guidelines, please contact us through Facebook: @lafo762

We can’t give legal advice, but we’d love to understand how this is affecting law abiding shooters.

(Dated 29 December and signed by Manager of Weapons Licensing)