“Behind” and “rednecks” – Queensland Government’s description of shooters and farmers, while closing businesses under pandemic emergency powers 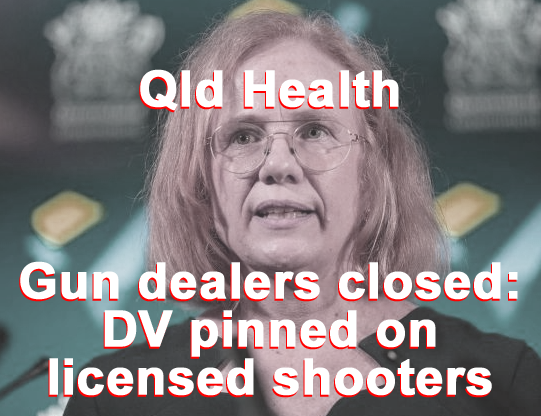 This week we quietly celebrated Australia Day and the range of values and cultures that have contributed to the success of our country. With the celebration behind us, we dive into the deeply un-Australian attitudes exhibited at the highest levels of Queensland’s Labor government . Senior public servants write-off the concerns and comments of shooters, calling them “behind” and “rednecks”. Townsville MP, Minister for Mines Scott Stewart, backs this behaviour by refusing to seriously confront it and deal with it strongly. We break the timeline down starting March 2020 into:

In March 2020, Covid-19 was beginning to spread worldwide and had crept into Australia. Queensland’s Parliament had enacted laws to give unprecedented powers to one senior public servant within the State. For Queensland, that was Chief Health Officer Dr. Jeannette Young. The powers granted to Dr. Young included the power to confine the whole population to their homes, to send people to quarantine facilities, to close businesses and much more which would, in any other circumstance, have been regarded as totalitarian. These powers were exercised by way of publishing ‘Public Health Directions’ (made under the Public Health Act, by Dr. Young) on the Queensland Health website. The directions have changed frequently over almost two years, and you can see almost 500 of them archived if you click through to the directions archive.

Dr. Young was later rewarded with appointment as Governor of Queensland but she really doesn’t feature in this story. It was the Premier’s Department, through their policy office, that coordinated the detail of those directions. They were drafted by the Premier’s Department and simply presented to Dr. Young for her signature. Voluminous consultation, by phone and email, was coordinated across the Queensland Government. We do not have all the emails or records of meetings, but we have enough documents to paint the picture. On the single issue of restricting firearms dealers, Rebecca McGarrity, Executive Director of Social Policy in the Premier’s Department, sent and received dozens of items from more than five Queensland Agencies and Departments and from private industry on the weekend of 28-29 March 2020.

This policy intent reveals that the most basic stereotypes about the Brisbane City-based Labor government is true.

Firstly, none of them understand the first thing about sporting shooters or about farmers – these people already have guns and ammo. The intent of the restrictions is thwarted before they were even published.

Secondly, they don’t appreciate (or care about) the basic statistical realities in their own State. Both suicide and serious domestic violence very rarely involve firearms (let alone legally owned firearms), while on the other hand very many serious commercials activities require firearms, including:

Thirdly, the insinuation that vetted firearms licensees are likely to commit domestic violence is a slur that the Labor government is happy to circulate and promote. Perhaps they really believe it themselves.

The fast reaction of the “behind” “rednecks”

A lot of shooting organisations, such as the Queensland organisation of the Sporting Shooters Association of Australia, played it safe. No criticism of the Labor government’s policies during a pandemic.

However, some organisations – those with skin in the game – reacted quickly. Shooters Union of Australia ran a mass email campaign urging their members to write to the Premier’s office. The Firearms Dealers Association (Qld) and reacted with newspaper advertisements and press.

Queensland Gun Exchange setup an email autoresponder to their customers asking them to write to their member of parliament. Shane Knuth MP wrote to the Premier and was brushed off.

The representations weren’t lost on Chief Inspector of Explosives Alex Mandl and his team. The Chief Inspector himself emailed other agencies, describing Shooters Union as “behind”.

One of the Chief’s team went on to call them “rednecks” – a description which received no rebuke from the Chief.

This is the regulatory culture Queensland Labor promotes. When businesses are shut down and make representations about how they should be allowed to open safely, a very senior public servant calls them “behind”. His staff call them “rednecks”. The articulate spokeswoman for the Firearms Dealers (referenced lower in the email trail and who is quoted in the press above) is called a “behind” “redneck” by two senior men whose salaries your tax dollars pay. As you will discover, Labor Mines Minister Scott Stewart won’t take any meaningful against on this outstanding regulatory leadership.

As a fourth true stereotype, we see the complete arrogance of the Labor government – calling the private sector “behind” when they try to keep pace with public servants who have all the time in the world to keep up with government’s fart-of-the-moment thinking.

The Premier (not Health) really makes the public health directions

The Public Health and Other Legislation (Public Health Emergency) Amendment Bill 2020, upon enactment, gave the Chief Health Officer the power to make broad ranging public health directions. Non-compliance was a criminal offence with stiff fines – terms of imprisonment were later added as a penalty. In the explanatory note to the Bill, you will find the justification:
Chief health officer directions
The Bill inserts new provisions in the Public Health Act to provide that the chief health officer may give a public health direction if they reasonably believe the direction is necessary to assist in containing, or responding to, the spread of COVID-19 within the community.

However, the exercise of these powers was fundamentally coordinated from inside the Premier’s Department. You can see the Deputy Director-General, Mark Cridland, approving in writing changes to the directions for “publication” by Dr. Young.

Despite the hundreds of pages of documents released to us (including through searches at Queensland Health), there’s nothing revealing any intellectual attention by Dr. Young to the specific content of the public health directions. We suspect that the drafts turned up in her inbox and got signed, with the content being almost wholly determined by the Premier’s Department.

This suspicion is corroborated by the supplication of Chief Inspector Mandl when he offers to the Premier’s Department, not the CHO, to actively limit ammunition sales beyond the public health directions. Mandl openly offers to restrict ammunition sellers beyond the public health directions to further the Labor government’s policy intent. How can I be useful to you, Anna?

Getting the documents: how independent is the Information Commissioner?

We launched a rolling series of applications under Queensland’s Right To Information Act for documents related to the public health directions closing firearms dealers.

The Department today released more than 150 pages of documents. A variety of items have been redacted which are not sensitive personal information.
One example: Document A Page 98 – A shooting group (name redacted) is causing trouble and “usually a bit behind”.
No personal information resides in the name of a pro shooting organisation. There are some subject lines also redacted. These should be released.

An organisation or entity name can comprise personal information within the meaning of this definition, where that name can be coupled with other information so as to allow the identity of an individual or individuals to be ascertained. The example you have cited comprises, in our preliminary view, information of this kind. Accordingly, the public interest harm factor stated in schedule 4, part 4 section 6 of the RTI Act automatically applies to favour nondisclosure.

At each of the four stages the Information Commissioner’s office was keen to close this down with no more work, their standard line at the end of every email:

If LAFO accepts the above preliminary view, you do not need to do anything further – if I do not hear from you by [date], I will finalise this review informally under section 90(4) of the RTI Act, and close our file.

The Minister protects the public service from any consequences

We wrote to Mines Minister Scott Stewart in late 2021 about the language used. The Minister would not criticise the Chief Inspector (who called Shooters Union ‘behind’), but instead deflected attention to the language of the staff:

As the Minister I find the language and representations made in that correspondence to be completely unacceptable... [the other staff member] is no longer employed…

The Minister went on to refer the matter to the CEO of Resources Health and Safety Qld – the agency within the Minister’s portfolio in which the Explosives Inspectorate sits. We wrote to the CEO and he replied:

In our final analysis, Mines Minister Scott Stewart, who is a Townsville MP, is basically unwilling to confront a culture of calling shooters, farmers and his own constituents “behind” “rednecks”.

When Scott is down in Brisbane on government business, what do you think he calls you?

Link this post, and ask him why he tolerates Explosives regulators calling shooting groups “behind” and “rednecks”.