Will Qld Labor’s lever-action re-categorisation make you a paperwork criminal? 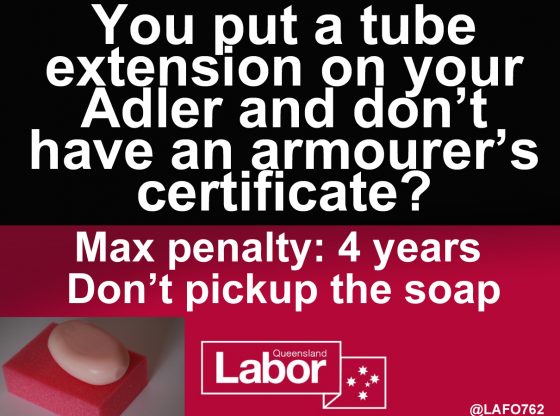 We refer to your letter template and fact sheet concerning the Weapons Legislation (Lever Action Shotguns) Amendment Regulation 2017 available for download from the Weapons Licensing page of the QPS website.

The fact sheet explains that from 1 March 2018 lever-action shotguns will transform from Category A (the same category as air rifles and double-barrel shotguns) to become Category B firearms or, if they have a magazine capacity beyond five rounds, Category D firearms. The sheet explains that these changes arise under the updated National Firearms Agreement. Why these shotguns are so dangerous they must be re-categorised out of acquisition by the general public – yet thousands of members of the general public are still allowed to own them – is left a mystery that cannot be resolved by reference to public safety. No matter.

Your sheet calls on all lever-action license holders to ensure their magazine capacity is ‘correctly recorded’ in the Commissioner’s firearms register:

If you have a lever action shotgun, please review your current weapons list to ensure the maximum magazine capacity is accurately recorded for the firearm in your possession.
If you hold a lever action shotgun that is not accurately recorded, you can attend your local firearm’s dealer in person to update the register or you can contact Weapons Licensing by email and attach a current photo of your firearm.
Where a person can satisfy the authorised officer that the firearm was manufactured and purchased with, or lawfully modified to have, a magazine capacity of more than 5 rounds, prior to the regulation notification date of 10th October 2017, the registration of the firearm will be updated and endorsements on the persons licence undertaken accordingly. (Evidence of a lawful modification would include an Armourers certificate).

Countless law-abiding shooters bought off-the-shelf magazine kits and extended the capacity of their lever-action shotgun over five rounds.  The new regulations seem to indicate that the authorised officer must endorse a licensee’s license if the shotgun was ‘lawfully modified’ to have a capacity over five rounds.  However, the last sentence of your advice above could be read to imply the unless an armourer did the modification, it is unlawful and the license won’t be endorsed to own the firearm.

If that’s what you’re implying, then it also raises the question of when any minor modification to a firearm is lawful in Queensland.

What is a lawful modification?

The simplest guide to what a lawful modification is would seem to be section 62 of the Weapons Act.  It creates an offence, punishable by up to four years imprisonment, for ‘unlawful modification’ of firearms (emphasis added):

What is a reasonable excuse?

However, the reality is that when legislatures enact defences such as “reasonable excuse” they effectively give, and intend to give, to the courts the power to determine the content of such defences. Defences in this form are categories of indeterminate reference that have no content until a court makes its decision. They effectively require the courts to prescribe the relevant rule of conduct after the fact of its occurrence. That being so, the courts must give effect to the will of Parliament and give effect to their own ideas of what is a “reasonable excuse” in cases coming within s 545E even when it requires the courts to make judgments that are probably better left to the representatives of the people in Parliament to make.

Our questions to you

If  you’re going down the path of contending that a minor magazine kit modification is an unlawful modification because there is no reasonable excuse, then all sorts of routine modifications – like installing detachable magazine kits to replace integral magazines in rifles – have suddenly become a serious crime.  Indeed, even installing a scope or replacing a stock may, under your apparent view, amount to a serious unlawful modification.  Advice on this would be welcomed by the law-abiding shooting community.  You should offer some clear advice before Christmas (2017 not 2018) so that people can consider what action they need to take before the 1 March 2018 deadline.

Yours faithfully,
[Signed]
For LAFO Inc.