Treating farmers like terrorists? Katter and One Nation said “Stop the madness” 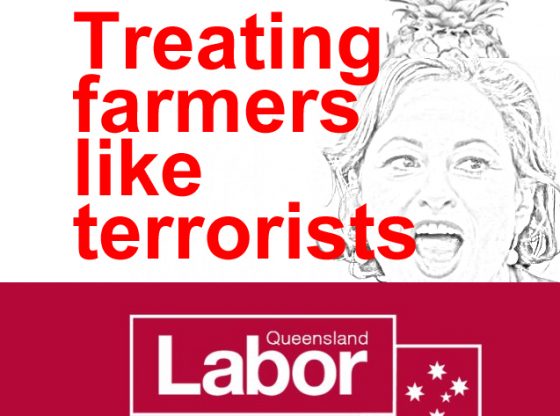 According to Queensland’s Weapons Licensing Branch, there are over 2,000 farmers licensed for short firearms for use in primary production.  The law already allows these licenses to be issued and the motion,
if passed, would not change the existing law.

In fact, the recent review of the National Firearms Agreement arose from a very important recommendation of the Martin Place siege review, which was undertaken by the federal and New South Wales governments, again for community safety reasons—to ensure people are safe. Much of the public discussion around the 2017 National Firearms Agreement has been around the decision of COAG to reclassify the lever action shotgun, a decision that Queensland supports and a decision that Queensland will be implementing in due course.

What the Martin Place siege review actually said (recommendation 6) was:

The Commonwealth, States and Territories should simplify the regulation of the legal firearms market through an update of the technical elements of the National Firearms Agreement.

Some folks have said “Mark Ryan isn’t anti-gun”, but you only have to read the contrast above to see he is running hard with Labor’s policy to ban firearms and punish law-abiding firearms owners.

Steve Dickson, for One Nation, didn’t give Ryan’s furphy about the Martin Place siege review a toehold:

We are not talking about giving firearms to bank robbers, criminals or anybody else, including the person who was involved in the Lindt Cafe siege. This is not about terrorism. I know that the Labor Party wants to treat farmers like terrorists…

What we already know about farmers and Cat H

We already know that the Weapons Licensing Branch set about to deliberately change the way they handled these applications. We have a copy of their telephone script to pressure farmers out of renewing their pistol licenses – or changing their license to a target shooters license. Weapons Licensing embarked on a deliberate campaign to frustrate how the law was designed to work in this area.  They have embarked on a campaign to take firearms off farmers who’ve held them safely for decades. Fed up with the situation, the Katter Party took a commendable step for positive change.

The debate about the motion

Katter Party has criticised the LNP for failing to support the motion:

The Government has continued its attack on regional Queensland and the LNP has supported them. […] Let’s be clear here, you still need a license to apply for category H.  The claims from the LNP that everyone would have access [under this motion] are ridiculous as there is a fit an proper person test to gain a license in the first place…

Included [in] the motion was the term ,’as a right’. I went and asked Robbie Katter what that term meant and he stated it meant ‘automatic’ ie. Primary Producers should have the automatic right to have a Cat H licence. I explained to him the potential unintended consequences of that wording.
My team and I then tried to negotiate with him to come up with a more responsible wording, that kept the gist of the motion, that we could support. […]
We didn’t speak because we weren’t allowed the opportunity. The motion was a Crossbench motion against the government so we had to rely on the crossbenches giving us a speaking spot. […]
If I had been allowed to speak, I would have reiterated everything I have said over the last 18 months about the unfair treatment of CAT H licence holders seeking renewal of their licence and our resolve to fix it.

It’s pretty disappointing some compromise couldn’t be reached – a successful motion in the face of this arrogant, dismissive Labor government would’ve been the better outcome.

As you’ll see in the extracts below, when the subject is firearms, the Labor Party chants “Port Arthur” like a Greek chorus to justify pointless red tape. There was a time when this chant worked. But it doesn’t work anymore. Most of the public is indifferent to it. The LNP did not support this motion but neither are they joining in the chant.

You can only count on one thing: Labor’s capacity to mislead

I am going to table this Queensland Police document.
Tabled paper: Extract from Queensland Police Service web page titled ‘Concealable Firearms Licence’.
It states—
A Concealable Firearms Licence …
This licence may only be issued for the following genuine reasons:
a) Sports or Target Shooting
b) Primary Production; or
c) other occupational reasons.
It says it here, but no-one can get them, although the odd few are slipping through.

Mr RYAN
I must say—and it is important for us to note this—our government accepts and takes the expert advice on community safety from the Queensland Police Service. The Queensland Police Service is a professional and well informed service that is sworn to protect life. What do they say? The weapons regulations around category H are right because they are designed to protect community safety. […]

Mr KNUTH (Dalrymple—KAP) (6.17 pm): I rise to support the KAP motion that this House supports the rights of primary producers to own category H firearms by providing as-of-right access to category H weapons for primary producers.
[…]
If you want to get from one end of your property to the other it could be a 1½ to two-hour ride on a horse, four-wheeler or a motorbike. If you are carrying a rifle it can become very heavy, particularly when you are mustering, but if you have access to a pistol it is very, very simple. It is one of the tools that is needed to do the job. […]

Mr BUTCHER (Gladstone—ALP) (6.22 pm): I rise to oppose the motion before the House tonight. Back in April 1996 when I was a young fellow I remember hearing the news of a developing situation at Port Arthur in Tasmania. It was news of a mass shooting and I listened in disbelief. It was a massacre. Sadly, 35 people were murdered and 23 wounded on that day.
[…]
The Palaszczuk government listens. That is why Minister Ryan has set up the Firearms Advisory Forum. This forum has representatives from peak bodies, including AgForce and victims’ organisations, to ensure that we consult widely on this. Most of all, we receive and take advice from weapons licensing. They are the experts.

Mr DICKSON (Buderim—PHON) (6.27 pm): I wholeheartedly support the motion put forward tonight, and I hope that the LNP and other crossbenchers do too. I will read this again so it is easier for the Labor Party to understand. The motion states—
That this House supports primary producers rights to own category H firearms by providing as-of-right access to category H weapons for primary producers.
We are not talking about giving firearms to bank robbers, criminals or anybody else, including the person who was involved in the Lindt Cafe siege. This is not about terrorism.
I know that the Labor Party wants to treat farmers like terrorists. That is what they have done ever since I have been in this House. They treat farmers very badly. This is an opportunity for the House to stand up for the farming industry tonight. That is what the Katters are doing. That is what One Nation is going to do.
I hope that the LNP supports the motion also. They can buy a whole lot of votes here tonight by looking after rural industries, the gun lobby and the shooters organisation. These are real Queenslanders. LNP members should not demonise them like the Labor Party does.

Hon. JA TRAD (South Brisbane—ALP) (Deputy Premier, Minister for Transport and Minister for Infrastructure and Planning) (6.32pm): The member for Buderim talked about us coming together tonight over the issue of guns. […]
I have great respect for our primary producers—

Opposition members (interjecting): No, you don’t.