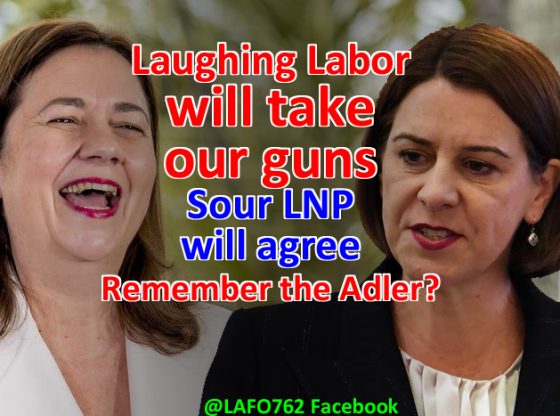 Queensland’s LNP has been quick to agree with Labor on new laws that would punish farmers, gun dealers, law-abiding shooters and small business. LNP sided with Labor to give one doctor the power to close any (or all) business without compensation. This power was immediately abused to close all gun dealers on the pretext that dealers being open would fuel domestic violence.

Despite LAFO accessing documents under Queensland’s Right To Information Act that reveal the Labor Premier’s Department is pulling the doctor’s strings and writing the closure orders, the LNP remains silent. In the documents, you can see different senior officials in the Premier’s Department working out which businesses will live and which will die. But of course, the LNP gave the Labor government this power by willingly voting for it! The LNP has made no effort to check or restrict the dictatorial power they gave Queensland Labor.

What if the pandemic erupts again in Qld?

Labor has already shut all the gun dealers once (while leaving JB Hi-Fi open to trade). What do you think will happen if the Coronavirus pandemic, which is still erupting across India, the United States, Europe and parts of Asia, erupts in Queensland again?

Do you seriously think Labor will not use any excuse to close firearms dealers again? Even for online sales?

Do you think Labor will not take any opportunity to hurt the law-abiding voters it hates the most: shooters?

The LNP are not our friends

This isn’t the first time the LNP have given Labor the power to hurt businesses, farmers and shooters. Deb Frecklington, the LNP leader who would be Premier, personally voted in favour of Jackie Trad’s trendy inner-city push to ban lever action shotguns. Just like every other LNP member besides Tony Perrett, Member for Gympie.

Don’t be one of the thousands of farmers and shooters across Queensland with short memories. Don’t forget Labor’s anti-farmer gun grabs, their vegetation laws, their neglect of anything outside Brisbane. Don’t forget the LNP signing-up to those mistakes, too and giving Labor the power. Don’t forget the LNP bought into the campaign driven by Labor’s inner-city Deputy Leader, Jackie Trad, to ban lever action shotguns.

Think of all the things going wrong in other states of Australia. Think of the appearance laws (banning guns because of what they look like), criminalising gel ball blasters, new and crazy restrictions of all kinds. This is what Labor stands for. This is what LNP won’t say ‘No!’ to.

Voting Labor or LNP is shooting yourself in the foot

Don’t negligent discharge in the ballot box. Vote Katter or One Nation.

Qld Labor Lockdowns: businesses are on their own
Let’s revoke your firearm license