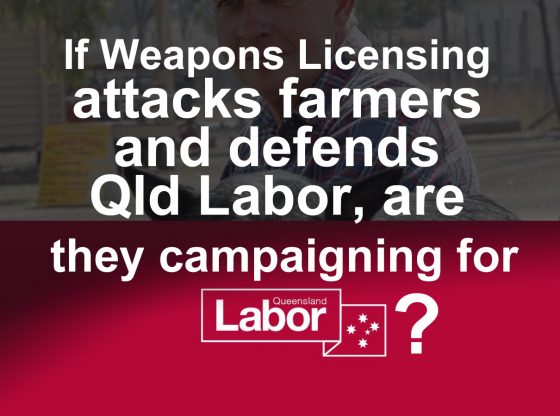 We write to congratulate you on your prominent entrance into Queensland’s State Election campaign through the ABC News:
http://www.abc.net.au/news/rural/2017-11-10/rural-qld-police-stick-to-their-guns-on-category-h-licences/9134956

Your Branch (Weapons Licensing) has taken a strong position refusing to renew many concealable firearms licenses of farmers who’ve safely held those licenses for decades, such as Mr Smythe and Mr Browne (read about them here) from Westbrook and Dalby.  Queensland Labor has been vehement in defending your confiscation of guns from law-abiding farmers.  For reasons no one can explain, your Branch has burst into the media after many months of silence in what could be viewed as a calculated intervention in a State election campaign to support Qld Labor.

Question 1: Have you given other media interviews?  If you were campaigning for a State government seeking re-election, we’d expect to see you popping up in other media appearances to defend their policy.

ABC News quotes of you present a deeply misleading picture about your Branch’s decisions in this area.  ABC News reported:

Inspector Guild denied Queensland’s Weapons Licensing branch was under any pressure to come into line with other states under the National Firearms Agreement (NFA).
That agreement specifically precluded the use of Category H firearms for primary production purposes.
But he did not rule out more graziers being refused permit renewals in future.

Those insights, along with changes to animal welfare guidelines, have shown long arms were a preferable means of euthanasing livestock.

QPS documents we have obtained under the Right To Information Act show that your Branch thought there was no change to animal welfare guidelines at the time the Branch decided to start attacking farmers.  Those documents say:

Finally, the documents we have from your Branch make it clear they are expected to bully applicants into withdrawing their applications.  They say:

Question 4: Is bullying still the preferred tactic of Weapons Licensing Branch?  Who in your Branch wrote ‘I propose’ [we bully farmers]?  Are they still working in the Branch?

As always, we await your reply.  Or maybe you’ll just pop up in the media doing more interviews.