Your Police and public servants are hiding an awful lot 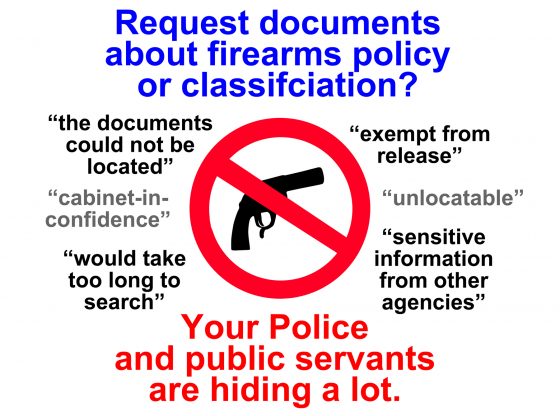 Because it has been banned, like the Desert Tactical Arms rifle that is no longer available for sale in NSW, or the Warwick WFA1 straight-pull rifle you can’t buy in WA or Tas, or magazines of a certain capacity, you should try putting in a Freedom of Information request for documents about it.  It may cost $40-50.  You may get some small number of documents or, if it’s really sensitive, you’ll get a huge range of excuses for why they can’t find documents or give them to you.

Straight-pull rifles: a case study in talking you out of it

A few months ago, one LAFO volunteer applied for documents relating to the WA Police decision to ban the Warwick WFA1 straight-pull rifle because (in someone’s view) it looks like a semi-automatic rifle.

For the first few weeks, the Freedom of Information unit in WA Police liaised with the firearms branch.  On three separate occasions they were given reasons no documents existed or could be found. After weeks of negotiations, they ultimately refused to produce anything.

Let’s pause for a moment to consider that there is absolutely nothing secret or sensitive about a government agency’s decision about whether a rifle looks like another sort of rifle.  They had documents in their possession and – in spite of the principle of FOI that government information is a public resource – they chose to hide it.

Documents emerged only after complaints were made and an internal review initiated.  It turns out they were sensitive about it for two reasons.  First, the documents reveal a great deal of uninformed chatter between the State firearms branches and the Feds.  They don’t say anything of substance beyond “what do you think?  would it be banned in your State?”

Secondly, the simplistic reason the WFA1 was banned in WA is:

It is not any particular item or part of a firearm that categorises it to have ‘the appearance etc’.  It is the complete package (appearance).

A separate email reveals the Warwick WFA1 is thought by Police to look like an M-16.  There were no documents showing any detailed consideration of the appearance of an M-16 as against the WFA1.  There is just a bald assertion that the two rifles look the same.

The firearms registries are sensitive about their decisions on classification because those decisions are too often lazy, ill-informed and do not contain any level of reasoning that would survive public scrutiny.

As we explained a few weeks ago, there is frequent cooperation between the State firearms registries, the Australian Criminal Intelligence Commission and the Federal Police.  They work tirelessly to concoct specious reasons to ban firearms in your State.

You can spend six to twelve months seeking basic information on the sort of advice the Police are giving to your Police Minister and other politicians.  At the end, you might not get anything at all, as one of our volunteer’s efforts to look into the background advice to the new Queensland Weapons Regulations reveals.

When the Police show up unannounced to ‘audit’ your firearms…
Do you have guns? You must be a bad person.