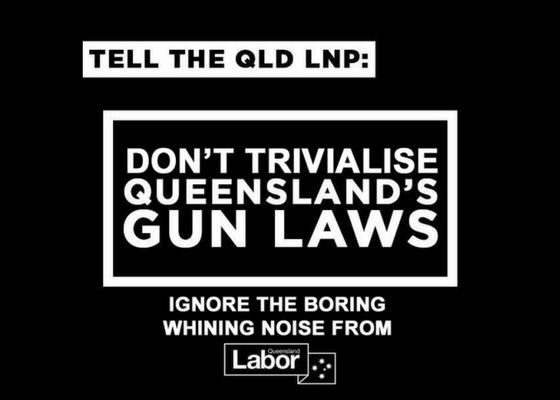 After Jackie Trad created her ridiculous video claiming all sorts of lies regarding the Adler lever action shotgun, there was an understandable backlash from law abiding firearms owners. Now in her form letter response, we would like to correct her on a few more issues.

JACKIE WROTE:
Thank you for your email to my office about the recent petition to reclassify the Adler shot gun.

I appreciate the opportunity to respond to the common questions raised in the correspondence to my office, and to counter any misinformation within the community.

What was decided at COAG?
At the 9 December 2016 meeting of the Council of Australian Governments (COAG), all States and Territories agreed to reclassify lever action shotguns based on the recommendations from the review of the National Firearms Agreement (NFA).

There were a lot more things than that agreed to Jackie, including limiting the amount of ammunition licensed firearm owners are allowed to purchase in a given period, mandatory 28 day processing time for every permit to Acquire, banning of handguns for farmers and dozens of other restrictions.

JACKIE WROTE:
Why was there a review of the National Firearms Agreement (NFA)?
The review of the NFA arose from a recommendation of the Martin Place Siege Review, jointly undertaken by the Federal and New South Wales governments. The firearms policy set out in the NFA is designed to achieve the best balance between the needs of people, such as sporting shooters and primary producers, who have a genuine right to access firearms, and the interests of the broader community.

The objective of the review was to ensure that Australia’s firearms regulations reflect advancements in technology and changes to the firearms market.

Show me one initiative that came out of the review that achieved the objective of SIMPLIFYING THE REGULATION OF THE LICENSED FIREARM MARKET!

Over a dozen clauses in the original agreement changed from “should” or “could” to “must” leading to massive changes to Qld’s gun laws, at least ½ a dozen completely new sections of restrictions, unachievably complex reporting requirements, restrictions on numbers and types of guns that can be accessed by farmers, licensed firearm owners, competitive shooters and professional pest destruction companies just to scratch the surface.

What consultation has taken place with stakeholders?
A Firearms and Weapons Policy Working Group, with representatives from every Australian jurisdiction, conducted the review and consulted extensively with a range of key stakeholders from the firearms industry, the agricultural sector, sporting and recreational shooters, victims of crime groups and police.

OUR RESPONSE:
THIS IS AN OUTRIGHT LIE! Allowing individuals to speak at the group on one occasion for 3 minutes each with no feedback does not constitute extensive consultation. Not one single sentence of the 2017 NFA was shown to one single shooting group prior to signature or before being posted in the public domain.

OUR RESPONSE:
This was done after the review of the NFA was complete! Please stop it!

JACKIE WROTE:
Is the government going to continue to consult with stakeholders?
The Palaszczuk Government acknowledges that the vast majority of firearms users in Queensland are responsible and recognises the importance of consultation and listening to the views of the community. As such, the Minister for Police held a firearms forum in February 2017 with a broader group of stakeholders, including firearms dealers and recreational and sporting shooters, police, victims of crime, the legal community, along with representatives of the agricultural sector.

The Minister for Police has invited forum members to get out and about in their communities to seek views and feedback from interested parties and report back to the forum. With genuine feedback and consultation, the government is best placed to achieve a balance that meets the needs of law-abiding firearms users and the safety interests of all Queenslanders.

Lever action shot guns have existed for over 100 years, why re-categorise them now?
While lever action technology is not new, the improvement of manufacturing standards, metals, tolerances and durability means that newer lever action shotguns like the Adler are technological improvements that are faster and more reliable.

OUR RESPONSE:
Please! You need to understand what you are talking about! The Adler is no faster than previous models of lever action shotguns. By your logic the old lever action shotguns greater than 5 shots are slower, less reliable and have posed no problem for over 100 years…..But you still banned them!

You also banned .410 lever action shotguns as well. Why? There have been no new .410 models or any issues with .410 shotguns.

JACKIE WROTE:
What impact will the re-categorisation of lever actions shoguns with a capacity of five rounds or less from category A to B have on firearms owners?
The change will have minimal impact on licensees who currently own those firearms. Future applicants would be required to show a genuine need for a lever action shotgun similar to the reasons now required for a Category B rifle.

OUR RESPONSE:
NO! NO! NO!….There is no increased rate of fire. Please show us the risk assessment. We desperately want to see this body of serious research that you are basing your decision. Do you realise this has an integral magazine and is slow to reload?

JACKIE WROTE:
The reclassification is consistent with the categorisation on self-loading and pump action shotguns with a magazine capacity of greater than 5 rounds.

OUR RESPONSE:
It is not self-loading or a pump gun. Why would you make it consistent with something it is not?

JACKIE WROTE:
Is there going to be a buyback of lever action shotguns?
The Palaszczuk Government will be consulting broadly with stakeholders through the firearms forum to develop a transition plan for those impacted by the planned changes.

OUR RESPONSE:
Just tell us straight – Does the QLD LABOR GOVERNMENT believe in taking people’s property off them without compensation?

JACKIE WROTE:
Where can I find out more about weapons categories?
Information on the current categories of weapons can be found at: https://www.police.qld.gov.au/programs/ weaponsLicensing/licenceApplication/weapons/categories/categories.htm

Again, I appreciate you taking the time to write to me regarding this issue. While I have taken the time to consider your correspondence, I still strongly believe it’s in our community’s best interests to reclassify the Adler shot gun.
Kind regards
Jackie Trad