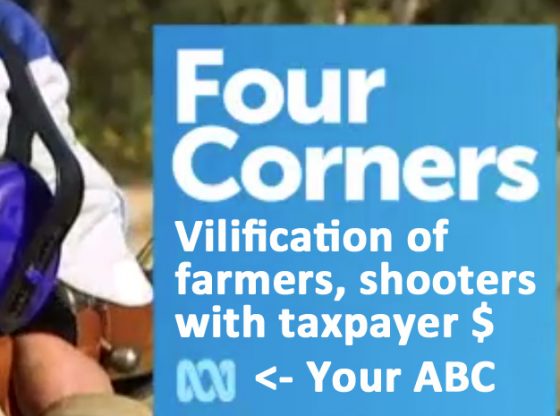 Last night the Australian Broadcasting Corporation’s Four Corners program ran a 45-minute hit campaign against Australia’s firearms industry and pro-shooting groups.  It was laden with the most extreme rhetoric (“how many have to die?”).  It really stood out just how hard the ABC had to work to find examples of homicides by licensed firearm owners.  Almost a million people are licensed in Australia and they commit virtually no violent crime.  So what else can we learn from this extravagantly taxpayer-funded television?

The Four Corners piece exemplifies the difference between the anti-gun crowd (including the Public Health Association of Australia, the ABC itself, Fairfax Media and the Australia Medical Association) and the many groups such as farmers, recreational shooters, conservationists stopping feral pests and the firearms industry with a legitimate interest in the peaceful and purposeful use of firearms.

The anti-gun crowd are mainly comprised of people who take money from taxpayers and use it to campaign for bans. They use your money to restrict what other people (in this case farmers and shooters) can do with their own money and property. The Public Health Association, ABC, AMA and Philip Alpers’ gunpolicy website all take significant amounts of Commonwealth government funding. They then push their own political anti-farmer and anti-gun agendas.

The pro-gun crowd are farmers, business people and sporting shooters operating productive businesses and earning their own way. Sporting shooters with no business interest in shooting write to politicians, access government information through FOI/RTI and hassle the bloated anti-firearms bureaucracies of government. They do this on their own time and with their own money. They don’t need to grasp for taxpayer dollars to make their point.

The ‘documentary’ made a big deal about how much private money was donated to shooting lobby groups (around $1.2m over an unknown period).  Nothing was said about the countless millions of taxpayer dollars that have been funnelled into the anti-gun campaigns.  Thanks to Four Corners for carefully not mentioning where Alpers’ money comes from, despite giving him minutes of free air time.  You need only click this link and search ‘Alpers’ for one small example.

Many non-ABC media outlets, such as Fairfax and the Guardian Australia, are also generally deeply hostile to farmers and shooters.  Fairfax and Guardian journalists have sometimes been through the ABC left-wing revolving door.

Their deep and seemingly irrational hostility to firearms has led them to make absurd and outrageous claims. Our favourite recent example involved Michael McGowan of the Guardian. McGowan teamed up with Gun Control Australia to claim their twitter account was ‘hacked’ by the evil gun lobby. Unfortunately, the story was totally imaginary. The twitter account in question was setup as a joke.  It is clearly a parody of Gun Control Australia and it makes light of their hysterical views.

Fancy not being a journalist and not being able to recognise obvious satire?  Here’s an excerpt: 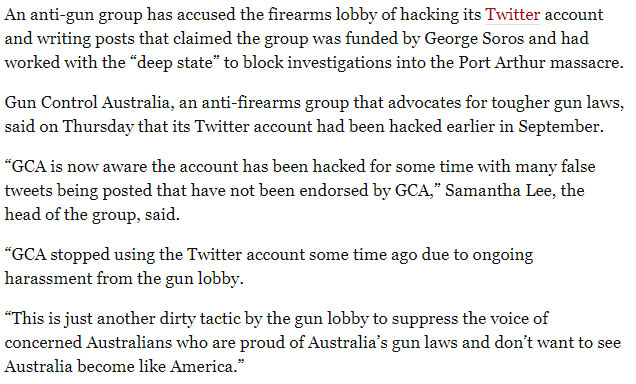 The full original article is lovingly preserved by the Internet Archive: https://web.archive.org/web/20180920061748/https://www.theguardian.com/australia-news/2018/sep/20/gun-lobby-accused-of-dirty-tactics-after-anti-gun-groups-twitter-account-hacked

The original has been deleted from the Guardian Australia website, no doubt in quiet shame.

The third camp: shooters who oppress and profit from other shooters

There is one small, third camp of relevant people.  They are shooters or people with shooting connections who benefit from increased government regulation in the area.  Maybe they contract to build IT systems to track, monitor and limit firearms and ammo sales.  Maybe they sell their firearms expertise for the advancement of more intrusive regulation.  These people are shooters who have the dubious honour of making their money by oppressing their fellow shooters.

You didn’t see them in last night’s Four Corners hit piece, but they’re out there.

Confiscations and ammo limits? Personal data is the key to a more intrusive registry and more cost for you
GetUp! try to pin John Edwards’ double-child-murder on licensed shooters